ATLANTA, Georgia - September 15, 2011: Kung Li organizes boxes containing more than 600,000 signatures in support of clemency for death-row inmate Troy Davis in the reception area of the Georgia Board of Pardons and Paroles at the James "Sloppy" Floyd Building in Atlanta.

Death-penalty opponents and civil rights leaders this morning delivered more than 600,000 petition signatures to the state Board of Pardons and Paroles asking officials to grant clemency to Troy Davis, the long-time death-row inmate who's maintained he didn't kill Savannah police officer Mark MacPhail more than 20 years ago. More than 40,000 signatures were collected in Georgia.

According to Amnesty International, a human rights group which has helped raise awareness about Davis' case, nine individuals have signed affidavits implicating another man for the officer's killing..."Mark MacPhail is a hero and we grieve for his mother and family," the NAACP's Edward DuBose said at a morning news conference. But "too many people have come forward and said Troy Davis did not kill MacPhail."

The five-member Georgia Board of Pardons and Paroles, which meets Monday, is most likely the last hope for Davis, who's scheduled to be executed on Sept. 21. A majority vote by the board will decide whether Davis' sentence is commuted or if his execution will proceed. 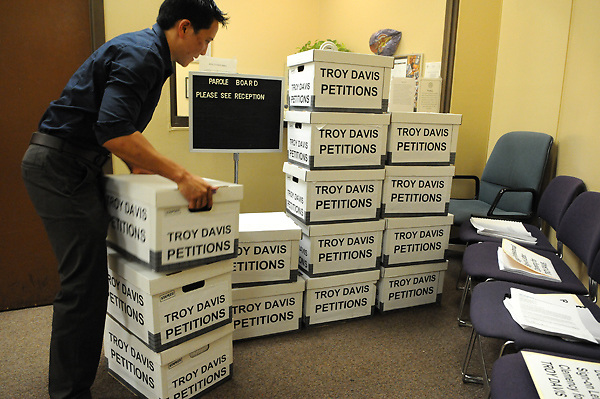